On this trip, we quite literally only had one night in Bangkok. And there was one thing that we HAD to do while we were here. We had heard the rumours...  We had the teaser from that infamous scene in Pricilla Queen of the Desert...  But we had to see it for our own eyes. Yes, we wanted to see a ping-pong ball show.

For those of you reading this from a convent, a ping-pong ball show is where the female "entertainers" on stage project ping-pong balls out of their "lady parts". (And these were real ladies...  The "not-so-real" ladies is an entirely different genre of show in Bangkok - but we would have needed two nights in Bangkok to fit that it!)

There are probably dozens and dozens of these "shows" in Bangkok, most of them concentrated in the Patpong region. Before arriving I watched a show on Bangkok scams, and I knew that we had to be on our toes in these places to make sure we didn't end up getting fleeced. Someone had told us about one bar called "Super Pussy". We checked it out on Google Street View, and it had a big neon sign on the outside that said "Super Pussy" - so with nothing else to go on, we figured that having a neon sign at least gave some air of respectability and non-scamminess to the place.

So Steven and myself, along with our new BFF's from the cruise Carrie and Lori, headed out to find Super Pussy.

As soon as we were fairly close, a "local" came up to us and said "looking for Super Pussy? Follow me". We were of course skeptical, but since he we walking in the right direction we followed. He then tried to get us to enter a bar that did NOT have the aforementioned big neon sign. Obviously he would be getting a good commission for bringing tourists to THIS particular bar. We said "no thanks" and walked off, trying to lose him, but it was impossible. Whenever we zigged, he would double zag, and be two steps ahead of us again. This time at least he led us to the REAL Super Pussy (where I'm pretty sure he still got some sort of commission - even though we were going there anyway!)

We stood outside for a while, deciding if we should really go in. The bar itself was up a set of stairs, and one of the things I had read to avoid scams was to stick to the places on street level. But that neon sign kept giving me some level of reassurance!

We started to poll the "patrons" as they exited. "Were you scammed?". We were told that it was the real deal, but to discuss the price of EVERYTHING upfront, since otherwise they will charge you whatever they want. And don't let the women swarm you and try to get you to buy them drinks, since that will probably bankrupt you.

So up the stairs we went. We entered a medium sized room, with a stage in the centre, stools around the bar surrounding the stage, and banquette seating in back and along the sides. There were maybe about 20 other patrons in the place. A woman on stage was blowing a whistle - not from her mouth - while other women danced topless looking quite bored.

We were quickly seated at bar stools near the front and asked "how much???". We were told 500 Baht (about $16) each for 1 drink and to watch the show. We asked "how long? 1 hour?". Her reply wasn't that clear - although she nodded and showed us a printed sheet showing all of the "tricks" we would be able to see. We tried to bargain her down to 300 Baht each (we were told ALWAYS bargain in Bangkok), but she wouldn't budge. So we paid the 2,000 Baht for the 4 of us to the "hostess". But she remained in front of us with her hand out. It took a while, but we then realized that she wanted a tip. Of course, how silly of us. We each forked over an additional 100 Baht, and then she got out of the way so we could "enjoy" the show.

What followed was essentially a vaginal circus act. Of course, there was the ping-pong ball trick. Our friend Carrie even got to hold the paddle to hit back the balls as they were shot towards her (and for the record - she had a pretty good return rate - I think she may have practiced at home before the trip). But there was more. One woman (who may have been old enough to be someone's grandmother) squatted over bottles of spritzer water, popping off the caps and spraying the crowd with the water (at least I hope it was the water). Another woman inserted a straw, and then blew out candles on a birthday cake (I'm not sure if that trick was to fire code). Grandma came back on stage, inserted a black marker, and wrote out "Welcome to Thailand" on a sheet of paper. And although there was no smoking allowed in the club, a performer showed off her cigarette smoking skills (two at once no less!)

In one of the more daredevil parts of the evening, Lori got to hold a ballon while a woman blew out a dart to pop it. (That would be fun in the hospital trying to explain how you got a dart in your eye). I got to participate by pulling a 5 meter string of decorative lights and silk flowers out of... well, by this point I don't have to tell you where I was pulling it out of. (While no photos were allowed in the club, Steven managed to sneak one in - it's not the clearest, but I think you can figure out what is going on). 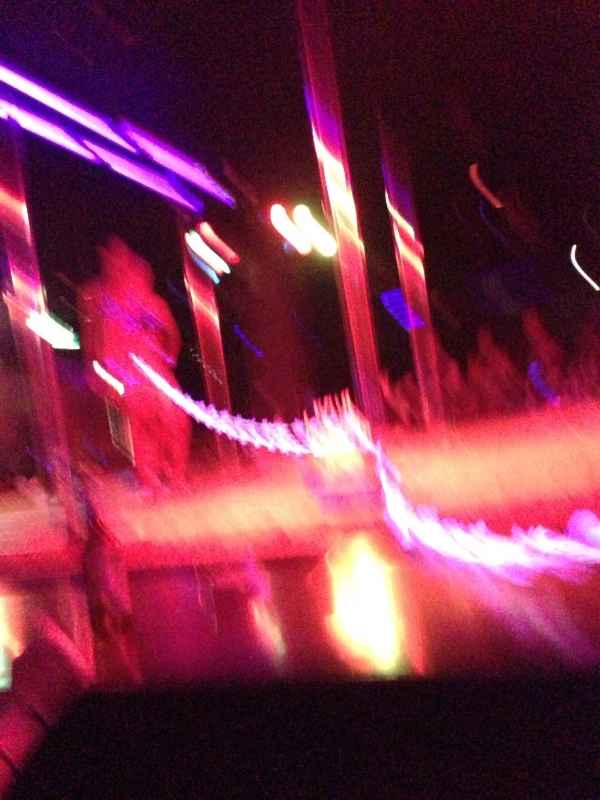 Between every act, the women would come around with the tip box, asking for a 100 Baht tip. Asking is probably not a strong enough word -- they were DEMANDING a 100 Baht tip. Now remember that 100 Baht is only about $3, so it really wasn't that much money each time, but it started to get annoying. Especially since the feeling was that if you stopped tipping, you would probably get asked to leave. In retrospect, that's understandable - and we should have realized that the 500 Baht we were quoted up front wasn't going to be "all in".  And in terms of the actual dollar amount it was trivial. But it still felt like we were being hustled somehow.

After seeing the full range of tricks (they were back to the whistle blowing) we decided it was time to go. We had a fantastic time, and definitely something to tick of the bucket list.

Of course, politically I was a bit torn. Did we participate in the exploitation of these women, or are they taking control and using their skills to make as much money as they can (and thus it's us in the audience being exploited). I don't know the answer, although it's probably somewhere in between, with each performer falling somewhere on the spectrum. But food for thought: the average wage for a worker in Thailand is about $300 per MONTH, while each performer we saw probably takes in that much in tips in one NIGHT. Yes, they probably have to give a percentage of that to the house, and yes, they may have to pay for their own ping-pong balls and KY Jelly, but it's still a pretty lucrative gig.