The GuysWhoTravel are back from Vegas, and I am happy to report that a fantastic time was had by all.

Mike’s Vegas cherry was finally taken, and he really enjoyed himself and expects to come on our next Vegas excursion in August. Hopefully by then the sunburn he got on Saturday at the Aria pool will have gone away.

As mentioned in our introductory Vegas post, we ended up staying at three different hotels this weekend. We had a room at Aria from Thursday to Sunday, a room at Cosmopolitan from Friday to Sunday, and a room at Planet Hollywood for all the nights we were there. All of the rooms were comped, and came with offers of free food and/or gambling credits, which is why we got multiple rooms. But not to worry MGM Resorts International, Caesars Entertainment and Deutsche Bank, we gambled enough at all three properties to make the room comp worth your while!

Of the three hotels, it’s hard to pick a favourite, but it’s easy to pick the worst. Perhaps we set our standards too high, but Planet Hollywood really is a dump. The casino is fine (albeit I always get totally lost and disoriented in there), but the rooms have really gone downhill. The hallways were rundown, there was black mold in the shower, and the phone (at least in our room) was broken. If I had actually been paying for the room (or for that matter actually been sleeping there!) I would not have been happy.

Of course, to be fair, it’s hard for Planet Hollywood to come close to living up to the other hotels we were at. We have stayed at Aria numerous times before, and it is probably our favourite place to stay on the Strip. The rooms are modern, nicely appointed, and fully automated, and even their standard rooms are a good size.

And we love the casino at Aria too. Steven and I tend to keep our gambling (or using the politically correct term, “gaming”) to MGM properties, of which Aria is one. We have Platinum status in MLife until September of this year, so that gets us a bunch of perks at the casino and hotel. (For the record, we aren’t quite sure how we got Platinum status - we gamble a fair bit, but nowhere near the level that they say you need to in order to get that status. We think it was a bit of a fluke as they converted over to the new program. We expect to drop down a level or two once this program year is up).

And I realize that it sounds strange to say that a casino smells fantastic, but this one really does! They even sell the scent if you want your home to smell like the casino!

As much as we love Aria, since we had the offer to stay free at Cosmopolitan, we had to give that a try as well. And it did not disappoint. We were given a “Terrace Studio” room, with a balcony that overlooked the strip. (It claimed to be on the 51st floor, but since hotels in Vegas do not have any floors starting with or ending with the unlucky number 4, it wasn’t REALLY the 51st floor!).

I would describe the decor of the room as “hip”, in comparison to Aria’s “clean”, but it was still pretty impressive. Steven said he liked the decor of the Aria room better, but for me it was tough to choose between the two (notwithstanding the fact that the Cosmopolitan room was much bigger than the standard size room we got this time at Aria -- although we have stayed in the one-bedroom corner suites at Aria in the past and those win hands down).

Here's a slideshow of pics from our Cosmopolitan room:

Highlights of the trip: 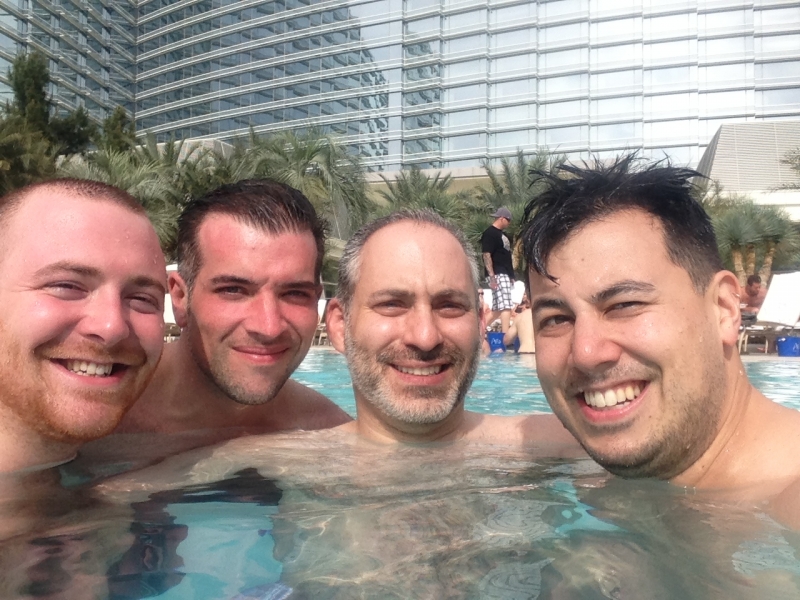 Lowlights of the trip:

But all in all, another great Vegas vacation. Looking forward to our next planned trip there in August!